Git is a content-addressable filesystem. Great. What does that mean? It means that at the core of Git is a simple key-value data store. You can insert any kind of content into it, and it will give you back a key that you can use to retrieve the content again at any time. To demonstrate, you can use the plumbing command hash-object, which takes some data, stores it in your .git directory, and gives you back the key the data is stored as. First, you initialize a new Git repository and verify that there is nothing in the objects directory:

Git has initialized the objects directory and created pack and info subdirectories in it, but there are no regular files. Now, store some text in your Git database:

The -w tells hash-object to store the object; otherwise, the command simply tells you what the key would be. --stdin tells the command to read the content from stdin; if you don’t specify this, hash-object expects a file path at the end. The output from the command is a 40-character checksum hash. This is the SHA-1 hash – a checksum of the content you’re storing plus a header, which you’ll learn about in a bit. Now you can see how Git has stored your data:

You can see a file in the objects directory. This is how Git stores the content initially – as a single file per piece of content, named with the SHA-1 checksum of the content and its header. The subdirectory is named with the first 2 characters of the SHA-1, and the filename is the remaining 38 characters.

You can pull the content back out of Git with the cat-file command. This command is sort of a Swiss army knife for inspecting Git objects. Passing -p to it instructs the cat-file command to figure out the type of content and display it nicely for you:

Now, you can add content to Git and pull it back out again. You can also do this with content in files. For example, you can do some simple version control on a file. First, create a new file and save its contents in your database:

Then, write some new content to the file, and save it again:

Your database contains the two new versions of the file as well as the first content you stored there:

Now you can revert the file back to the first version

or the second version:

But remembering the SHA-1 key for each version of your file isn’t practical; plus, you aren’t storing the filename in your system – just the content. This object type is called a blob. You can have Git tell you the object type of any object in Git, given its SHA-1 key, with cat-file -t:

The next type we’ll look at is the tree, which solves the problem of storing the filename and also allows you to store a group of files together. Git stores content in a manner similar to a UNIX filesystem, but a bit simplified. All the content is stored as tree and blob objects, with trees corresponding to UNIX directory entries and blobs corresponding more or less to inodes or file contents. A single tree object contains one or more tree entries, each of which contains a SHA-1 pointer to a blob or subtree with its associated mode, type, and filename. For example, the most recent tree in a project may look something like this:

The master^{tree} syntax specifies the tree object that is pointed to by the last commit on your master branch. Notice that the lib subdirectory isn’t a blob but a pointer to another tree:

Conceptually, the data that Git is storing is something like this: 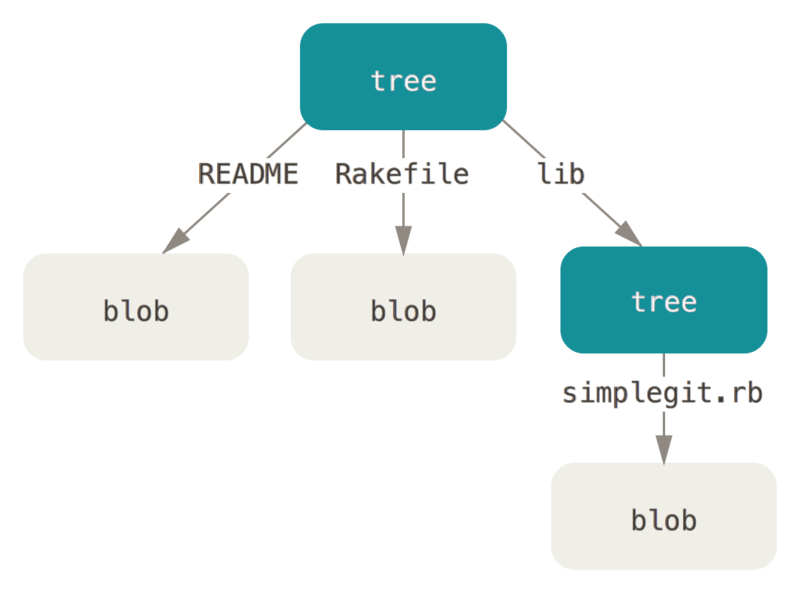 You can fairly easily create your own tree. Git normally creates a tree by taking the state of your staging area or index and writing a series of tree objects from it. So, to create a tree object, you first have to set up an index by staging some files. To create an index with a single entry – the first version of your test.txt file – you can use the plumbing command update-index. You use this command to artificially add the earlier version of the test.txt file to a new staging area. You must pass it the --add option because the file doesn’t yet exist in your staging area (you don’t even have a staging area set up yet) and --cacheinfo because the file you’re adding isn’t in your directory but is in your database. Then, you specify the mode, SHA-1, and filename:

In this case, you’re specifying a mode of 100644, which means it’s a normal file. Other options are 100755, which means it’s an executable file; and 120000, which specifies a symbolic link. The mode is taken from normal UNIX modes but is much less flexible – these three modes are the only ones that are valid for files (blobs) in Git (although other modes are used for directories and submodules).

Now, you can use the write-tree command to write the staging area out to a tree object. No -w option is needed – calling write-tree automatically creates a tree object from the state of the index if that tree doesn’t yet exist:

You can also verify that this is a tree object:

You’ll now create a new tree with the second version of test.txt and a new file as well:

Your staging area now has the new version of test.txt as well as the new file new.txt. Write out that tree (recording the state of the staging area or index to a tree object) and see what it looks like:

Notice that this tree has both file entries and also that the test.txt SHA-1 is the “version 2” SHA-1 from earlier (1f7a7a). Just for fun, you’ll add the first tree as a subdirectory into this one. You can read trees into your staging area by calling read-tree. In this case, you can read an existing tree into your staging area as a subtree by using the --prefix option to read-tree:

If you created a working directory from the new tree you just wrote, you would get the two files in the top level of the working directory and a subdirectory named bak that contained the first version of the test.txt file. You can think of the data that Git contains for these structures as being like this: 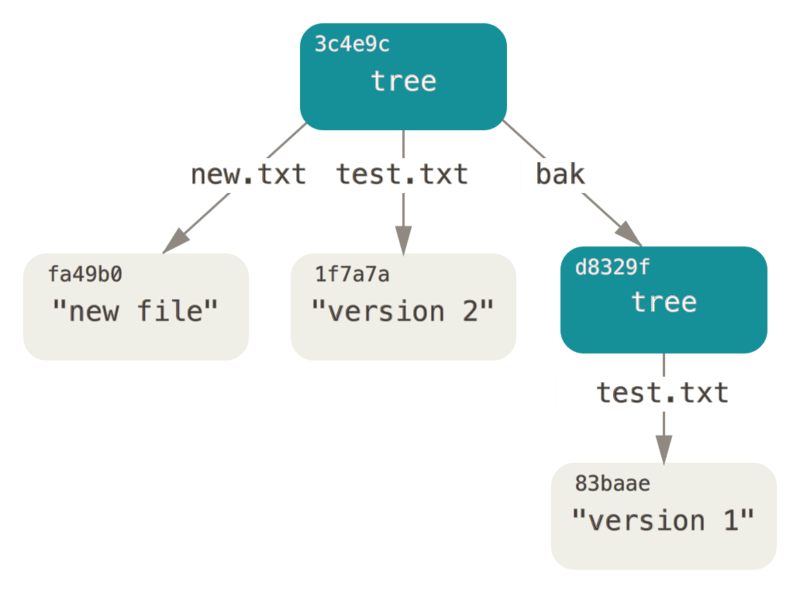 Figure 150. The content structure of your current Git data.

You have three trees that specify the different snapshots of your project that you want to track, but the earlier problem remains: you must remember all three SHA-1 values in order to recall the snapshots. You also don’t have any information about who saved the snapshots, when they were saved, or why they were saved. This is the basic information that the commit object stores for you.

To create a commit object, you call commit-tree and specify a single tree SHA-1 and which commit objects, if any, directly preceded it. Start with the first tree you wrote:

Now you can look at your new commit object with cat-file:

The format for a commit object is simple: it specifies the top-level tree for the snapshot of the project at that point; the author/committer information (which uses your user.name and user.email configuration settings and a timestamp); a blank line, and then the commit message.

Next, you’ll write the other two commit objects, each referencing the commit that came directly before it:

Each of the three commit objects points to one of the three snapshot trees you created. Oddly enough, you have a real Git history now that you can view with the git log command, if you run it on the last commit SHA-1:

Amazing. You’ve just done the low-level operations to build up a Git history without using any of the front end commands. This is essentially what Git does when you run the git add and git commit commands – it stores blobs for the files that have changed, updates the index, writes out trees, and writes commit objects that reference the top-level trees and the commits that came immediately before them. These three main Git objects – the blob, the tree, and the commit – are initially stored as separate files in your .git/objects directory. Here are all the objects in the example directory now, commented with what they store:

Figure 151. All the objects in your Git directory.

We mentioned earlier that a header is stored with the content. Let’s take a minute to look at how Git stores its objects. You’ll see how to store a blob object – in this case, the string “what is up, doc?” – interactively in the Ruby scripting language.

You can start up interactive Ruby mode with the irb command:

Git constructs a header that starts with the type of the object, in this case a blob. Then, it adds a space followed by the size of the content and finally a null byte:

Git concatenates the header and the original content and then calculates the SHA-1 checksum of that new content. You can calculate the SHA-1 value of a string in Ruby by including the SHA1 digest library with the require command and then calling Digest::SHA1.hexdigest() with the string:

Git compresses the new content with zlib, which you can do in Ruby with the zlib library. First, you need to require the library and then run Zlib::Deflate.deflate() on the content:

Finally, you’ll write your zlib-deflated content to an object on disk. You’ll determine the path of the object you want to write out (the first two characters of the SHA-1 value being the subdirectory name, and the last 38 characters being the filename within that directory). In Ruby, you can use the FileUtils.mkdir_p() function to create the subdirectory if it doesn’t exist. Then, open the file with File.open() and write out the previously zlib-compressed content to the file with a write() call on the resulting file handle:

That’s it – you’ve created a valid Git blob object. All Git objects are stored the same way, just with different types – instead of the string blob, the header will begin with commit or tree. Also, although the blob content can be nearly anything, the commit and tree content are very specifically formatted.